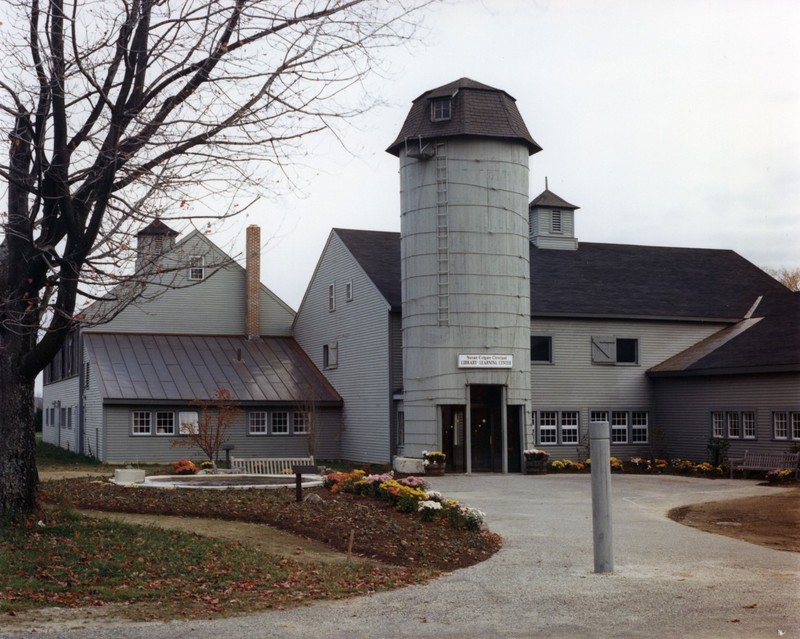 The Susan Colgate Cleveland Library and Learning Center has been Colby-Sawyer’s library since it opened in 1985. It is located by the Ivey Science Center and is easily noticed by the old Silo and its barn construction. There is a water fountain with benches by the entrance, as well as a garden and a wind turbine, which was installed as part of Colby-Sawyer’s sustainable living initiative during President Thomas Galligan’s tenure.

The library was built in 1985 out of two pre-Civil War barns. It is a unique library because of this creative design and approach to preserving these barns while giving them new utilities. The building has won several architectural awards. It is named after Susan Colgate Cleveland (1891-1967), the daughter of James Colby Colgate and Hope Hubbel Conkling, who served on the Colby Junior College Board of Trustees for thirty years.

Construction and Planning
In the early 1980s, President Nicholas H. Muller III helped to push for the construction of a new library to take over for the small and outdated Commons-Fernald Library. The Burley Partnership, an architectural firm based in Vermont, was hired to design the new library. The first sketches were drawn up in 1980.

The Burley Partnership planned the new library to serve as a new axis for future campus development into the east. It was also designed to help balance the campus, since in the 1980s buildings like the Dan and Kathleen Hogan Sports Center and Ivey Science Center were not yet built. The Burley Partnership conceived that with this new library an expansion into a development of the eastern campus would ensue. The purpose of this expansion was in order to serve the long-term goal of moving academics to the east while maintaining residency, recreation, and administration functions in the center and west of the campus.

The library design planned for a ten year expansion of library resources. Construction cost approximately $2.5-3 million, which would be around $8.5 million or less when adjusted for inflation (as of 2014). The library construction began in August 1984 and took about a year to complete. The official dedication ceremony was on Sunday, September 8, 1985. Walking tours of the new library were given prior to the official opening. 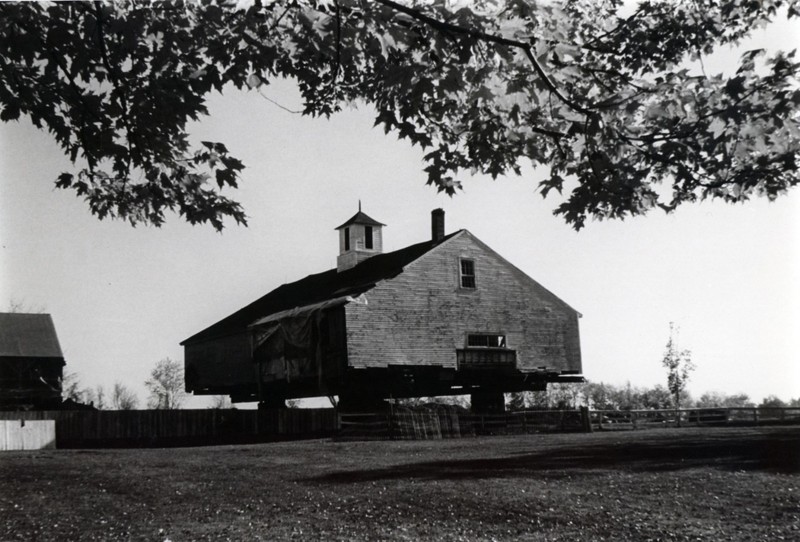 Changes to the Library
The library shifted from a card catalogue system to a digital catalogue during the late 80s, under the tenure of Loretta Kelner, the College Librarian (c. 1985-1989). Digital cataloguing made it far easier to keep track of books and to search for books people wanted. A digital catalogue is still used by the library today.

On April 1, 1999, Information Services and Library and Media Services were merged into a new department: Information Resources (IR). This move was made in order to bring technology and the library together. Tech services likely started to be provided in the library after this merger, such as the help desk on the entry level floor (level three) where students can get help with their computers.

The Academic Development Center and Harrington Center for Career Development moved into the upstairs of the library in the Summer of 2009. The current Academic Development Center offices belonged to IR staff previous to the 2009 move. Before the 1999 IR merger, these rooms did not exist. It was an area used to hold microfilm from 1985 to 1999, but the microfilm was moved to level one in order to create the IR offices. The new offices were constructed in 2000.

As a part of the IR move into the library, Carrie Thomas, the College Librarian, since 1998, had her office split into two. The current server room in the back of the library used to be storage. IR suggested it become the server room.

Computers on level three near the reference desk have always been there, but the amount of computers has increased over the years. The video resources that are now on level three were originally on level two but were moved to provide more comfortable study areas. Computers and printing were added to level five and were not part of the original library design. Before computers were added this area was for study. In 2013 offices on level two became study rooms, and Carrie Thomas’s office on level three also became a group study room. More tables were added to level one, as well, to accommodate a growing student body and demands for more study space.

Awards
The Vermont and National Chapters of the American Institute of Architects Award of Excellence for Library Architecture (1987) and it was acclaimed by The Smithsonian and Historic Preservation magazines.