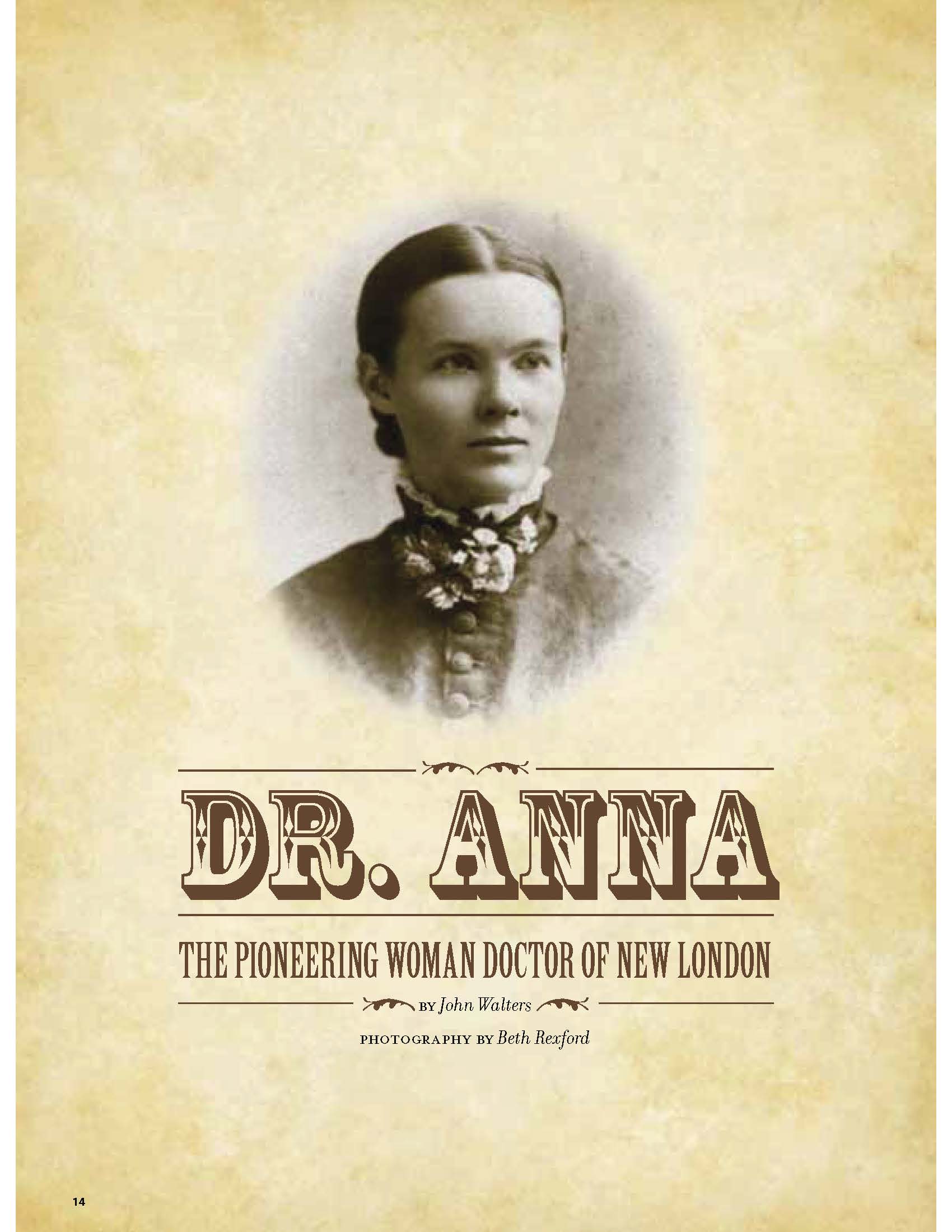 Anna Littlefield is well-known in the New London area for her role as one of New Hampshire’s first female doctors. Lesser known is that, before she was a doctor, Littlefield had several ties to Colby Academy (now Colby-Sawyer College). Littlefield’s schooling and teaching at Colby Academy would contribute to and help shape her medical career.

Littlefield was born on December 1, 1859, the daughter of Seth Littlefield and Sarah Bragg Littlefield. She had one brother, Ira, who was born in 1873. Littlefield spent the first years of her life living in a house on the Grafton-Croydon line in New Hampshire until, in 1869, the Littlefield family relocated to New London, NH, purchasing a house on Pleasant Street owned by Seth’s brother-in-law, Joshua Hemphill. Anna would reside in the Pleasant Lake house for the rest of her life, with the exception of the years she spent at medical school.

Littlefield was described as having “inherited her mother’s artistic temperament” (Lord, 498) and, as a young adult, was particularly interested in documenting wildlife. Anna attended Colby Academy, located in her hometown of New London, NH, where, according to the 1883 Colby Academy Catalog, she would have studied the “Ladies Course” which was designed to combine mathematics with “the Sciences, a careful study of the English Language and Literature, and a knowledge of Ancient and Modern Languages;” she graduated in 1884. After a brief stint teaching at a local school, Littlefield returned to Colby Academy to share her gift, teaching drawing and painting to another generation of Colby students (Littlefield’s own brother, Ira, would also attend the Academy and graduated in 1895); she is known to have taught at the Academy from 1890-1892.

Littlefield is best known artistically for her collection of flora from the region, having documented 97 different plants on canvas, as well as an illustrated bird book and several family portraits. She worked with a variety of mediums including paper, cardboard, canvas, eggs, and wood. Her work is best described as Audubon-esque, acutely rendered and often showing the object in various stages of development (in the case of plants) or in a variety of poses (in the case of birds). Hints of Littlefield’s scientific mind are also present; often the image would be accompanied by the species’ scientific name and additional information about the species.

Later in life, Anna told her great nephew, Lloyd Littlefield, that when the brick Academy building burned down in 1892 (see the Fall 2012 Colby-Sawyer Magazine for the story of the fire) she took it as a sign to pursue a hidden passion—to be a medical doctor. In an interview for Kearsarge Magazine, Lloyd relates, “She told me years later that she had always wanted to be a physician…so when the building burned down, she figured this was the Lord’s way of telling her that if she’s going to be a physician, she’d better get with it.” (Walters, 17) So, at the age of 32, Anna Littlefield went to the Women’s Medical College of Pennsylvania, the first college in the world to train women to be doctors and grant them a medical degree. After completing her degree, Littlefield would return to New London and set up an office in her Pleasant Street home. In the summer of 1897, when the state of New Hampshire began issuing licenses, Littlefield was the 13th woman to request a license and was the only female doctor practicing within 25 miles of New London (Walters, 16).

Dr. Anna, as she would become known to her patients, served as a general practitioner until 1946 and practiced medicine into her 90th year. She would work out of her home and was integral in the founding of the New London Hospital, working with other local doctors to encourage a group of women to found the New London Nursing Association and open a six-bed hospital located in what is now known as the Tracy Memorial Library. Littlefield’s home office was fully equipped with the tools and supplies that she needed to properly attend to her patients. She had a wooden desk where she could review her paperwork, but it also included a long wooden extension and a pair of iron stirrups which converted the desk into an examination table. Littlefield’s walls were lined with wooden cabinets that held her medical supplies and medicines which she prepared herself. And of course, she had a sturdy pair of snowshoes fashioned for her by her brother, Ira, for house calls.

Despite her passion for medicine, Littlefield’s love of art would never leave her. Instead, she would incorporate her sketches into her medical notes, particularly a handwritten reference book that she created on gynecology. Here, along with meticulous notes, are beautifully rendered, scientific sketches of the human body.