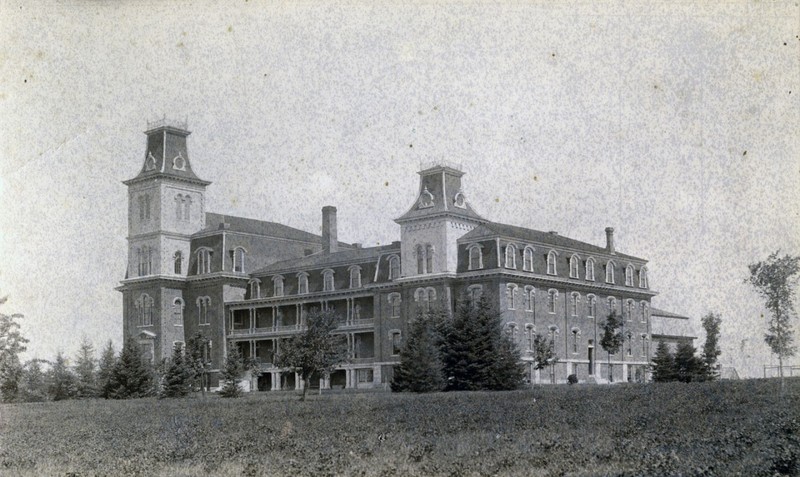 Colby Academy building before the fire

Although not called Colgate, a majestic structure once stood in the same place where Colgate Hall now reigns over Colby-Sawyer College’s campus.  The Colby Academy brick building has a story shrouded in myth and misinformation and it is time to set the record straight.

In the 1860s, it had become clear that to stay competitive the academy (known at the time as the New London Literary and Scientific Institution) would need “an endowment fund sufficient to pay for good teachers and equipment that would meet the reasonable needs of the pupils.”[1]  Susan Colby Colgate and James B. Colgate pledge twenty-five thousand dollars to the construction of a new building if the academy raised the other seventy-five thousand.  The goal became to raise a bit more money so “that it might be possible also to buy more land and put up a modern building of brick and stone on the crest of the hill…[because] on the top of the hill a school building would be a landmark for the countryside.  Up there one could catch glimpses of far horizons, and the winds that brought ozone to the lungs might blow away the cobwebs in the students’ minds.”[2]  It soon became apparent that the academy would be successful in its fundraising and a cornerstone for the new structure was set on July 28, 1868.  A plank sidewalk was also laid from Four Corners to the new academy building to increase accessibility to the new building.

The building was dedicated on July 7, 1870, as part of the academy’s commencement exercises.  It was to be the centerpiece of New London.

The new building was constructed in the ornate architecture of the period.  It was of brick with granite trimmings, and was finished in hard wood from New Hampshire forests.  The builders took pride in the local origin of the materials.  Sand was brought from Little Sunapee and clay was drawn from Sutton Mills for the bricks which were burned in kilns located on the grounds.  The stone foundations and finishing were hauled from King Hill.  The structure towered three stories above the ground and had a mansard roof.  Two towers in harmony with the rest of the structure rose still higher.  The belfry tower was one hundred and eleven feet high, commanding a wide sweep of vision.  In it was a pendulum one hundred feet long, which vibrated as the building felt the blasts of winter beat upon it.  The building had a total frontage of one hundred and eighty-six feet.[3]

The building served two purposes.  The west wing of the building was designed for academic purposes, housing classrooms, a library, a chapel, and recitation rooms.  The east wing provided rooms and boarding accommodations for one hundred women as well as parlors, a music room, and housing for the lady principal.  There was also a dining room, kitchen, laundry, and gymnastic facilities.  Cords of wood to heat the building were cut from the Springfield woodlot.[4]

The building flourished and students worked and lived in this towering brick building for over two decades.  Then, on April 25, 1892, tragedy struck.  It was the day of the academy’s annual mayflower excursion in the North Sutton woods.  The students left mid-afternoon and returned in early evening to a cloud of smoke billowing over the hill and Ira Littlefield ringing the Baptist Church bell.  They arrived at the academy to see flames pouring from the third story windows.  “With a rush they charged upon the building, grabbed their belongings from the rooms on the lower floors, carried out most of the books from the library, and saved three pianos and some of the other furniture.  There was no fire apparatus in town, and nothing could be done but watch the building burn.”[5]  Those who lived on the third floor lost nearly everything and fifty girls were homeless by nightfall.  The New London townspeople found places for the girls to stay for a few nights and the Heidelberg Hotel, formerly the ladies’ boarding house, was outfitted for the rest of the academic year.  Makeshift classrooms were set up in Colby Hall, the town house, the vestry, and private quarters and the Baptist Church was used as an assembly hall.[6]  The trustees held a meeting on May 19th and voted to “rebuild the academy at once on the old site… Colby Academy promises to remain forever on Colby Hill!”[7]

The ruins would remain a reminder of the loss for the academy until 1911 when construction began on a new structure that promised to bring the same majesty to Colby Hill.